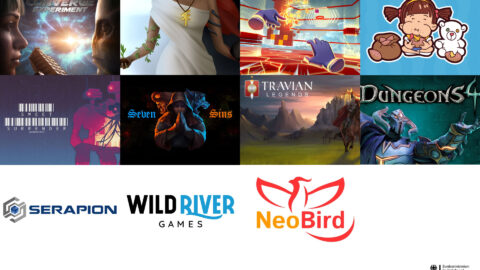 In a previous article (German version here), we presented the games that have received funding from the Bundesministerium für Verkehr und digitale Infrastruktur (BMVI, German Federal Ministry of Transport and Digital Infrastructure). In this article, we would like to introduce you to those companies based in Bavaria that have so far received a Produktionsförderung (production funding) from the federal government as part of the new, large-volume computer games funding.

Up to now, the federal government has supported 269 games via computer games funding since 2019. This combines the previous de-minimis funding and the new production funding (since September 2020). A total of 43 games from Bavaria have been funded through both funding methods. The computer games industry is growing constantly – and thus more and more new companies are being founded. Innovations in the areas of technology, culture and business are becoming apparent.

“However, despite rising overall sales in the sector, the market share of German games companies is shrinking. Likewise, the absolute number of people employed in this industry in Germany is also declining or stagnating” – according to the BMVI. Because of this, funding, such as that provided by the FFF Bayern, is essential to support and maintain German companies in the computer games industry.

Update from April 20, 2021: We published the article on April 19 and already the day after we received the news that ten more projects have received production funding as part of the large-volume computer games funding from the federal government. Six of them are made in Bavaria and thus the total funding amount for Bavaria in the new BMVI funding increases to a total of 6,831,290 EUR, distributed among eleven projects.

Three projects even receive more than 1 million EUR and we congratulate all the teams that receive funding from the BMVI as part of the federal government’s large-volume computer games funding.

How to get production funding

To fund a project of one’s own, support can be requested through production funding. For each year, the BMVI provides 50,000,000 euros in funding here according to its budget. This amount is also reflected in the new funding method, production funding: Now larger projects can also be funded – with sums in the six- or even eight-digit range. The previous funding via de-minimis, for smaller and medium-sized projects, has been completed in this regard. The money from the production funding is intended to make German games more competitive internationally. Furthermore, the number of German computer game developments should continue to increase.

Requirements for possible support are a German location of the developer studio, a corporation in the form of UG, GmbH or AG and the object of support as a prototype or production of a computer game whose development has not yet begun. The production funding is a non-repayable grant, which amounts to a maximum of 50% of the development costs. All detailed information on how to apply for the production grant can be found here. It’s worth taking a look: “The first projects were launched at the beginning of December 2020. We look forward to receiving further applications!”, says Federal Minister Scheuer.

Now we would like to present you the Bavarian games that have received a production funding approval within the framework of the large-volume computer games funding from the federal government. Congratulations!

To start with, Codename Süßkartoffel (Codename Sweet Potato) by the Munich-based company Mimimi Games GmbH is to be mentioned. The federal government’s computer game funding program will support the production of the real-time tactics game from 12/01/2020 to 6/30/2023 with a funding amount of 2,025,942 euros. Also on 12/01/2020, Mimimi Games announced their third project called Codename Süßkartoffel, which will be independently published by the company for the first time. After the successful games Shadow Tactics: Blades of the Shogun (2016) and Desperados III (2020), the developers remain faithful to the genre of real-time tactical games, but now entirely under the motto: 100% made by Mimimi – from art, to code, design, production and marketing.

The rogue-lite action game Sweet Surrender, which is produced by Salmi GmbH, also receives funding. In the shooter game, the player moves through an intuitive movement system within randomly generated areas. Various enemies in the world appear in combination with a futuristic design. The game encourages creative solutions to the hurdles posed. The BMVI supports this project from 03/01/2021 to 11/30/2021 with a sum of 120,867.53 euros. Further insights into the game and its development can be gained at the company’s developer blog. Sweet Surrender has also already received funding under de-minimis in 2020.

The turn-based strategy game Knights of Cathena by fivefingergames GmbH from Deggendorf received production funding of 119,114 euros for one year (01/01/2021 to 12/31/2021). The aim of the game is to defeat the enemy army and their king. The company already published a trailer for the predecessor game Steemknights, which is considered to be the source of ideas for Knights of Cathena. The project is a turn-based strategy game in which players try to overthrow the opponent’s king by means of their army – the figures having different strengths/weaknesses and being equipped with various items – on a chessboard-like playing field. The beta version is planned for Q4/2021.

Horse Club™ Adventures goes into the second round! After the success of the predecessor, Wild River Games GmbH from Munich is developing a second part of the series. Horse Club™ Adventures 2 is a 3D open-world game of the action/adventure genres. The characters are based on the well-known Horse Club toy series from the Schleich company. The sequel of the game brings new role-playing elements, mini-games and collecting features. Furthermore, there are new areas and characters to discover in the world. The Federal Ministry of Transport and Digital Infrastructure is supporting the second part with a sum of 546,749 euros from 03/01/2021 to 08/31/2022.

Also receiving funding was the turn-based strategy game Steamfleet Armada 1893 from NeoBird GmbH & Co. KG (Nuremberg). The game’s historically inspired setting includes a fictional parallel world in 1832, the chosen year coinciding with the invention of Charles Babbage’s steam-powered calculating machine. Players can look forward to deep sea battles with rouge-lite elements. The funding amounts to 192,032 euros and covers the period from 03/01/2021 to 09/30/2022.

Munich-based Realmforge Studios GmbH is working on Dungeons 4, the fourth installment of the globally successful Dungeons series, the first iteration of which was released in 2011. The BMVI is providing 1,843,684 euros in funding for the period from 04/01/2021 to 06/30/2024. The strategy game is to be released for PC and Mac as well as consoles. Players take on the role of the Absolute Evil and plan to bring the forces of good to their knees. To do this, they build a dungeon underground as their base, where they mine gold and other resources. Enemies must be stopped from destroying the dungeon heart – alone or in a team.

Travian Legends is the world-famous building strategy MMO for the browser, and Travian Legends: Mobile is the port of the title for iOS and Android platforms, which many game players have been eagerly awaiting. The grant project is worth 1,042,054 euros and covers the technical development as well as the adaptation of the controls for an optimal user experience on the smartphone. It runs from 04/01/2021 to 01/31/2024. Game players begin their adventure as a chieftain in ancient times by expanding their own village. Through skillful trade, building an army and forging alliances, players develop a powerful empire and battle hundreds of opponents for mysterious blueprints and the completion of the legendary world wonder.

Seven Sins is the new project from Bonus Level Entertainment UG (Munich). The adventure platformer is to be released for PC, Mac as well as consoles and its production is funded by the BMVI with 378,071 euros, with the duration being from 04/01/2021 to 09/30/2022. Moreover, the concept for Seven Sins has already been funded by the FFF. In it, players act as an investigative cleric who can enter people’s minds in fable form in order to fight the seven deadly sins and save the medieval village from the plague! A unique 2D art style in lead glass style, an emotional story with surprising twists and inspiration from the paintings of painter Hieronymus Bosch are the main features of the game.

Munich-based K5 Factory GmbH is currently working on a new title called Swish VR, which has already received funding from FFF. It is a VR/AR/MR, skill game and sports game where basketball meets arcade in interactive, vivid and surreal environments that are redesigned abstractions of European cities. The player’s mission is to conquer all these basketball courts in Europe. The project is funded with 287,384 euros with a duration from 04/01/2021 to 05/31/2022.

Reality Twist GmbH from Munich has already received funding for various projects from the FFF and the de-minimis program. For the development of The Converge Experiment, the BMVI is providing a total of 64,906 euros for the period from 04/01/2021 to 09/30/2023. The mobile game falls into the genres of adventure, role-playing and strategy games. In the narrative and cooperative real-time game, players can act together or pursue their own mission objectives and complete procedurally combined missions in the setting of a prisoner transport spaceship. The game draws an allegorical parable of the complexity of contemporary political and social decisions.

A company new to us in the Bavarian developer landscape is Serapion GmbH from Munich. The company has received 210,486 euros from the BMVI for the adventure learning game Adaptive Hero: an adaptive storytelling game over the period from 04/01/2021 to 09/30/2022. The game is being developed for mobile and the Nintendo Switch and is designed for children between the ages of 5 and 15. Game players take on the role of a hero character capable of learning and adapting, exploring their surroundings and learning about other characters and their stories. As an Adaptive Hero, players can befriend, interact with, and learn things from real or fabled characters that are necessary for further progress in the game. The associated learning process on cultural-historical topics takes place in a playful manner.

Congratulations to all funded projects. This list will be continuously expanded as new projects are announced.