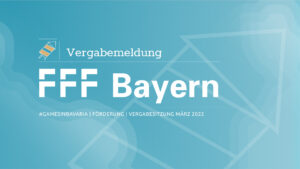 In 2022, the FFF Bayern funding committee will again hold its first round of decisions in March. A total of ten games projects can look forward to receiving funding in the areas of production, prototype or concept. With more than half a million euros, the Bavarian FilmFernsehFonds will support one production, one prototype development and eight concept developments, Bavaria’s Digital Minister and FFF Supervisory Board Chair Judith Gerlach says: “With this, we are strengthening our games industry in Bavaria, which with its work is also a driver for innovation in many other areas.” You can check out the funding list here and the associated press release here. Congratulations to all involved! 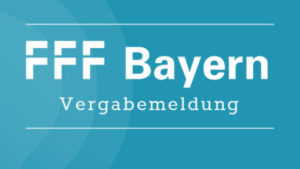 The third round raised over half a million euros for 12 games projects. 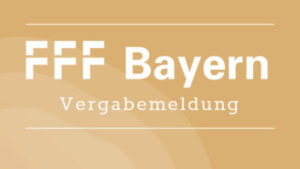 In the second funding round, 10 games projects were funded with 508,000 euros. 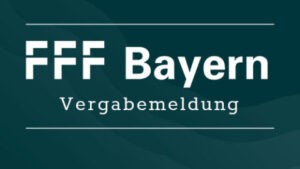 In the first round of awards, the FFF funded 10 projects with 1.2 million euros.

Studio Bit Barons GmbH from Eckental (Middle Franconia) can look forward to a remarkable sum of around a quarter of a million euros. The money will be used for the production of the point & click adventure game Jerry McPartlin and the Flute of Anasa. Join Jerry, an unsuccessful rock’n’roll musician, as he searches for his parents in the 1950s in the United States. In the process, you’ll get caught up in a mysterious conspiracy that goes far beyond a family story. Combine objects and solve puzzles to explore the history of the native people. Furthermore, the game guides you through exciting narratives and cutscenes. The project also aims to re-experience the lifestyle of that time. The conception and the prototype could already be financially supported by the federal funding.

The prototype funding in this round of awards was granted to Go Red GmbH with the game of the same name. It is a location-based AR game in which players prepare the colonization of Mars as pioneers. To do this, they maintain and recover technologies and raw materials on the red planet. Cargo containers can be collected by tapping on them so that equipment and consumables can be taken along. The core mechanic is completing quests in the form of minigames, which appear at special locations on the map. Since the quests have different difficulties, players must constantly keep an eye on their character and level up. The FFF is supporting the development of the prototype with a proud 120.000 euros.

Once again, most of the projects were able to convince the awards committee with their concept. Eight play projects will start in 2022 with funding of 20.000 euros each.

A first-person mystery adventure awaits you in the upcoming game Insomnia: The Eleventh Legion by NightinGames UG from Bayreuth. The atmospheric survival adventure relies on a lot of narration: The game takes place in the year 79 AD at the time of the Roman Empire in a legionary camp. Players immerse themselves in the role of Lucius Aurelius Remus, the civilian doctor of the XI Legion. He wakes up from a terrible nightmare and has to find out why all his comrades around him can’t wake up from their sleep. Lucius is able to see into the dreams of the sleeping people and find out why they are being held captive in the dream. On your way to the solution you will collect items that will allow you to enter new areas. You will also have to make offerings to the goddess Panacea so that Lucius is not forced back into the nightmare and can help his comrades.

The Bonrath Daniel, Frenzel Sebastian GbR (also known as: Clockwork Origins) from Erlangen is planning a further development of the endless racing game Tri6: Infinite, which was released in 2020. In the new multiplayer fun racer called Tri6: Arena, you can expect new vehicles with different values of acceleration and glide time. Each vehicle also has its own special ability, for example a dash, a jump or a hover function. Two game modes await you, once the new ( name-giving ) Arena mode and the Infinite mode. This endless racer mode should already be familiar to you from the previous game.

The Murder Hotel by Wegenbartho Games (in Arnstorf) is a mystery adventure game in which the main character, Ilmarinen Halla, is held captive by a dream demon. This demon challenges him to solve five murder cases in a nightmarish hotel – only then can he come back to life. You’ll embark on an exciting exploration of the hotel, encountering more mysteries surrounding the demons. In a Japanese graphic style (Chibi Style) you move through the hotel in a top-down view. Question other characters that appear within the game to solve the murder cases.

A successor to the EXIT series also awaits you. After the app EXIT – The Curse of Ophir (which is based on the EXIT board game series), which was a hit among critics and players alike, a second game for mobile devices will be released. With EXIT 2, United Soft Media Verlag GmbH wants to present players with an even more complex and challenging puzzle design. All possibilities of interaction on smartphones and tablets are to be exploited in order to challenge players cognitively in a new way. You can expect unusual but logical solutions with a lot of thinking outside the box.

Unforgiving Seas by SenAm Games UG from Munich takes us to the open sea. In the narrative rogue-like strategy game you control a captain of a small merchant ship. On your trade route through the Mediterranean Sea you master randomly generated, but also deliberately scripted quests. You will encounter authorities, private security agencies, NGOs and refugee boats. The storyline is branching, with different starting points for the game.

However, if fishing is more your thing, we can recommend Alles im Fluss (translated: Everything in the River) by erlkönig GAMES GmbH. The mixture of a fishing game and an action-adventure game with crafting elements offers you a game with a new twist: catch not only fish with the multifunctional Ango – an ancient relic – but also all kinds of items in the game world. This will allow you to create better weapons and tools. In combination with leveling up skills and creating new lures, you’ll be able to catch new and bigger fish. You can reach new areas by completing quests.

If you are more into (building) strategy games, you will enjoy Reterra by Daraban & Marino Entertainment GbR from Bayreuth. Play as the mayor of a small town, who wants to try to prevent an approaching catastrophe through technological progress. Because Terra is on the collision course of an asteroid. Work together in the multiplayer game and benefit from the joint trade and joint planning. But don’t be too hasty! Because this could have destructive consequences for the environment. The gameplay is shown in several successive rounds, where resources are not renewed after the game: Forests remain cut down, water remains polluted. Therefore, a sustainable strategy is required so that future generations can live in Terra.

Finally, we would like to introduce you to Project Hörn, which is designed by Kreative Kraut UG from Kempten. Players find themselves in the role of Sam, a young telecommunications maintenance technician. After a serious accident she is caught in a time loop and has to try to solve the mystery of an obscure captain. In the process, you’ll also discover his rust-ridden ship and a mysterious monster. You can communicate with other people on the ship via a radio. You’ll gradually find the solutions by exploring all possible paths on the ship. You can combine objects to link information together. Conflicts are solved automatically in cutscenes. The narration depends on the paths of the players and is told via the radio messages, the conversations and the environmental storytelling.

Congratulations to all funded projects and we are looking forward to news from the new and old #GamesInBavaria!

Feel free to send us an email to [email protected] or come to our new Discord server. Joint and exchange with us and others about all topics around #GamesInBavaria. You are also invited to exchange with other games companies in the Facebook group Gamesgrantler – The Games/Bavaria Community Group. We are also happy about a follow on Twitter and LinkedIn.