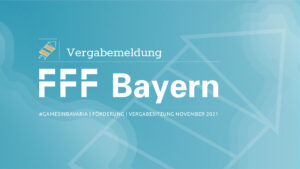 On 9 November 2021, the award committee of the FFF Bayern met for the third and last time this year to decide on the funding of new games. The result includes financial support for a total of twelve projects in the areas of concept, prototype or production. The total comes to 520,000 euros for studios in six different cities. Bavaria’s Digital Minister and FFF Chairwoman of the Supervisory Board Judith Gerlach also commented: “From pedagogically valuable video games for horse care to games of skill in virtual winter sports competitions – the Bavarian games industry once again shows how creative and innovative it is.” The published funding list can be found here at the FFF Bayern, additionally you can view the associated press release here. A summary of the individual funded games can be found in the following section.

In the second funding round, 10 games projects were funded with 508,000 euros.

In the first round of awards, the FFF funded 10 projects with 1.2 million euros.

The third round of awards brought 200,000 euros in funding for 5 projects.

Although only one project was funded in production in this last award session of 2021, the sum is remarkable: the horse-related adventure game Whisper 3 by Aesir Interactive GmbH (Munich) was able to claim 200,000 euros. The project is based on the fifth part of the Ostwind film series. Aesir Interactive has been developing games set in this world since 2016. The third part of the game series takes up the theme of (horse) circuses: The heroine Ari is caught in the dichotomy of enthusiasm for artistic riding but also the darker side of circus life. Ari wants to help the ageing show horse named Orkan. In an open-world environment, players can improve their riding skills, care for their horse and teach it tricks. Like its predecessors, Whisper 3 will be released for PC, Playstation and Nintendo Switch. The previous game titles in the series were also funded by FFF Bayern.

Two games are being supported in their prototypes in this round of awards. The first is the 2D stealth platformer Smiles Savings Banks by Irox Games UG from Garching Hochbrück. It is set in a city characterised by dreariness: An all-controlling bank tempts residents to pack their joy of life into so-called lucky crystals so that they can cash them in later. A group of circus performers protests against this practice and wants to give the people back their rightful joy. Different emotional states characterise this play, between which the players have to move skilfully: On the one hand, there is the tension of the bank and on the other, the relaxation resulting from the curious explorations of the world. The prototype will receive a total of 80,000 euros in funding.

The studio Crayon Games GmbH from Bamberg also received funding for their prototype: In their game Merge City, which is a genre combination of merge and city building games, players are supposed to expand and beautify their city in a feel-good atmosphere by combining objects. The characters and soundtracks are also in the foreground, for example through the stories that the city’s inhabitants reveal. New buildings can be unlocked through quests. This prototype is entitled to a total of 60,000 euros in funding.

Most of the projects were able to convince the award committee for the concept phase – a whole nine games were approved for funding this year. Each of the games listed below will receive a total of 20,000 euros in funding.

NeoBird GmbH & Co.KG from Nuremberg is planning an adaptation of Can’t Drive This by Pixel Maniacs. The game is now to be made available for mobile devices as Can’t Drive This Mobile. As with the PC version of the game, a player controls a car on a roadway with randomly generated components. For Android and iOS, common game design patterns are used to enable shorter game rounds.

Let’s stay with Pixel Maniacs (Benjamin Lochmann New Media GmbH): ChromaGun receives a sequel here, which was promoted in its conception: ChromaGun 2 also shows here the principle of colouring the game world with the ChromaGun, which gives it its name, that is familiar from its predecessor. The correct mixing of colours and the associated colouring of walls results in the overcoming of obstacles. The second part of the game series will include new features such as a multiplayer mode, a level editor and new techniques.

Winter sports such as biathlon, snowboarding, sledding or ice skating await players in the game XRLYMPICS by Icaros GmbH from Martinsried. Users can demonstrate their skills in various competitions. The game is played using the Icaros Cloud, a balance board that was developed and patented in Bavaria. The game thus fuses the fun of winter sports with a challenging body workout.

A multiplayer adventure game awaits you in YU & ME by Umbukuu UG (Munich). The two main characters Yume and Metus have to escape seven levels, which are equivalent to the seven deadly sins. To do so, they have to explore areas and solve tricky puzzles, which are also connected with moral decisions. The core mechanics of the game result from investigations, understanding and solving puzzles, finding clues and escaping rooms. Players are expected to spend about 20 minutes per room. Since there are both selfish and utilitarian solutions, there are also different game outcomes depending on the choices made by the player.

Regional and historical gameplay can be found in Totgeschwiegen by Active Fungus Studios GbR from Munich: You find yourself in rural Bavaria in 1866 and have to solve several murder cases. Totgeschwiegen Kapitel II has now been supported by a concept grant. Decisions made by the players influence the development of the story and the behaviour of the villagers, which makes this game a kind of Choose Your Own Adventure.

Ortomnia – Broken Trinity is a metroidvania (action adventure) in which players take on the role of a world guardian and must find out what is responsible for the downfall of the worlds of Ortomnia. Produced by Mystic Shelter e.K. from Nuremberg, you can expect a 2D adventure game characterised by exploration and combat, in which you can defeat enemies using normal weapons or magical abilities. By finding key items, you can pass through areas that were previously closed off. Mechanics can be unlocked by accompanying the protagonists.

A game that connects Twitch streamers with their viewers even more awaits you with the Community-Realtime-Strategy-Idler Stream Space 9 by Spaceflower UG from Nuremberg. Viewers can join the game directly and interact here. While streamers set up the space station, players can control the spaceships. There is both an idler and event phase, in which resources are generated on the one hand and attacks are carried out on the other. Spectators can also trigger undirected actions, so the experience is always different and fun.

Finally, we would like to introduce you to the location-based multiplayer game Catpure Heights by K5 Factory GmbH from Munich: The goal is to conquer the platforms of the real high ropes course. There is a single-player mode in which you compete against an AI, but also a multiplayer mode for different teams. Conquering a platform results in your own team receiving points, although platforms can be captured again by opponents. The winner is the team that claims the most platforms at the end of the time. The implementation is planned for the Jochen Schweizer high ropes course in Munich/Brunnthal.

Congratulations to all funded projects and we look forward to news from the new and well-known #GamesInBavaria!

Feel free to send us an email to [email protected] or come to our new Discord server. Joint and exchange with us and others about all topics around #GamesInBavaria. You are also invited to exchange with other games companies in the Facebook group Gamesgrantler – The Games/Bavaria Community Group. We are also happy about a follow on Twitter and LinkedIn.