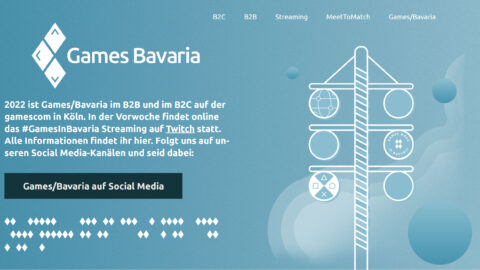 The time has come: our lineup and our activities for gamescom 2022 live in Cologne are all set! We kick off the gamescom frenzy from August 16 to 19 with the #GamesInBavaria streaming. From August 24 to 28, we will be in the B2B and B2C areas with 18 companies showing a total of 14 games developed. Find out more in the news and check out gamescom.games-bavaria.com (German only so far).

Munich, Germany, August 4th, 2022 – Games/Bavaria is once again supporting Bavarian developers at gamescom to establish them on the international games landscape. From August 24th to 28th, 2022, 18 companies from Bavaria will be on site in Cologne and present a total of 14 of their own titles:

Games/Bavaria will have a joint booth at the Indie Arena Booth in Hall 10.2 from August 24th to 28th. The following four companies plus two developers (with their own presence) will be there:

The publisher HandyGames presents three games at their own publisher booth:

In the B2B area, Handygames will also show the game Perish.

Also located in Hall 10.2 is the Indie Area Home of Indies, where a total of eight companies from Bavaria will be represented. The following seven as part of Games/Bavaria and one developer with its own presence:

A detailed overview of eleven promising Bavarian titles has been published on Premortem.Games.

On August 26th, a well-known streamer will host a community get-together at the Indie Arena Booth. The streamer will be announced on the Games/Bavaria gamescom page on August 10th.

To get in the mood for the games fair, the #GamesInBavaria streaming will take place the week before. On four evenings from August 16th till 19th between 4pm CEST and 10pm CEST, Bavarian streamers will again play Bavarian games on the Games/Bavaria Twitch channel.

In addition to classic Let’s Plays, the audience can also look forward to conversations with developers. The individual partners’ streams will all be broadcast on the official Games/Bavaria Twitch account and of course also on the respective content creators’ channels.

The complete streaming schedule will be available on the Games/Bavaria gamescom page at gamescom.games-bavaria.com starting August 10th.

All Twitch channels confirmed so far for the #GamesInBavaria streaming event:

All news about Games/Bavaria events and partner activities can be accessed at any time via the social media channels at https://linktr.ee/gamesbavaria.

As a partner of the Bavarian games industry, Games/Bavaria supports activities of games companies as well as associated media companies and service providers in Bavaria. The brand forms a hub for entrepreneurs (x/d/f/m), creatives and interested parties for the purpose of optimizing the framework conditions for the games industry in Bavaria. Games/Bavaria is supported by the Bavarian State Ministry for Digital Affairs and is a brand of WERK1.Bayern GmbH with strong partners.