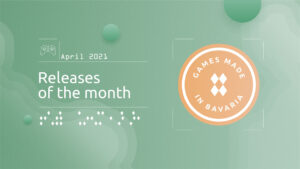 #GamesInBavaria Releases of the Month April 2021

The fourth edition of our Releases of the Month for this year is packed with eight new apps, games, tools and major game updates from developers in Bavaria, plus we have a VR highlight in Early Access. Two stragglers from March are also included and as always we are happy to present you such an exciting line-up of games Made in Bavaria – with reference to funding by the FFF Bayern or by the BMVI. Have we forgotten you or are you planning a release in May? Just send us a message and we will include you in the next edition of the monthly releases.

For the development of the 2D²-puzzle-platformer World-Splitter, NeoBird GmbH & Co. KG from Nuremberg received almost €140.000 in the de-minimis-funding from November 2019 to December 2020. On April 21, the release of World-Splitter was announced by Spain-based publisher Bumble3ee; the World-Splitter Reveal Trailer can be found here. World-Splitter can be played alone or with two players via shared/split screen co-op. The puzzle game is available on Steam and for consoles. In it you can look forward to multidimensional puzzles and travel through animated worlds that offer new tricky challenges. The game offers unique gameplay mechanics: A combination of jump-and-run elements as well as puzzles based around spatial thinking. Each level consists of two parallel worlds separated by a dimension rift. Players can move freely through the gap and interact only with the visible parts of the two worlds. For its innovative game concept, World-Splitter has already won the Indie Development Awards “Best Console Game” and the “Grand Award” at Game Connexion Europe 2020 – and the Nuremberg press has also recognized the game.

Since April 30, the Early Access version of VR Skater by Deficit Games from Lower Franconia has been available on Steam for PC-VR-devices such as Oculus Rift. In 2018, the team received €20.000 in concept funding from the FFF and de-minimis funding of nearly €75.000 from the BMVI from September 2020 to the end of May 2021. Now you can try out the immersive skateboarding game for yourself; a trailer is available on YouTube here. The skating is done with VR controllers, and according to the developers, all core features are already included in the Early Access version: There is a skate academy to learn tricks, challenges and two game modes. In the run-mode you can collect points and in the practice-mode you can freestyle in a relaxing way. The urban settings are accompanied by a soundtrack of up-and-coming musicians. Links to the first reviews and gameplay videos can be found on Deficit Games’ Twitter feed.

Funline Media GmbH from Munich already received funding from the FFF in 2014 and 2015 for the prototype and production of the educational game app Lazuli und die Zahlen (Lazuli and the Numbers), which won numerous awards; this was followed in 2018 by prototype funding for the project Lazuli und die Wörter (Lazuli and the Words), which is set in the Lazuli-universe and was released on April 29. The Lazuli-apps for Windows PC and iOS devices are divided according to different age groups and offer sustainable learning that is aligned with current curricula and scientific studies. Elementary school children playfully learn the spelling of the basic vocabulary with Lazuli und die Wörter – known to many parents as “learning words”. A turbulent runner with many levels and challenges provides the necessary relaxation between the learning units. Free play and phases of maximum concentration thus alternate, and the dog Lazuli accompanies the children on their learning adventures.

If you’ve been wondering what the dinosaur on Upjers Twitter is all about, we’ve got the answer for you: The prehistoric visitor was the star of a Tiktok from the Bamberg-based games company, in which the new app Dinosaur Park: Primeval Zoo was teased, which Upjers released for smartphone or tablet on April 27. The BMVI supported the project with de-minimis-funding of €200.000 in 2020. You can download the app for free from the Google Play Store and open your own dinosaur park in it, which wants to be decorated and filled with specially bred dinosaur species – something like Jurassic Park, only with USK 0 and the loving design typical of Upjers. A short trailer can be found here and Upjers is already working on making the game available for iOS as well.

One half of TheCodingMonkeys, headquartered in Frankfurt on the Main, is based in Munich, so we don’t want to withhold the second game app from the Monkey Box series from the two-person team. TheCodingMonkeys recently won an award at DCP for Polarized! and shortly after released Cards! for iOS. On their website you can play a teaser of the game directly in your browser. With the selected card you control the next action and unfold the story of the puzzle adventure, in which you can even make it rain strawberries. A review of the game can be found here and game designer Marcel-André Casasola Merkle provides further insights into the development on Twitter.

Once a month, Clockwork Origins from Erlangen publishes a progress report with updates on all of the team’s titles and projects. In April, the team announced that the endless racer Tri6: Infinite is the studio’s first title now available for the PlayStation 4 and compatible with the PlayStation 5. You can also download a free demo version of the title on Steam, itch.io and the Google Play Store to try out the game. As usual, Tri6: Infinite also features three different playable vehicles on the PlayStation, eleven unlockable power-ups, more than 300 obstacle variations, global leaderboards per vehicle, and support for up to four players in split-screen on PC and console. Click here to go directly to the trailer. From the progress report, you can also learn that the title Elemental War will also be released for PlayStation. In addition, there was an update for the mod management tool for Gothic games Spine, which is very popular during lockdown and whose capacities could be further expanded thanks to the support from the community.

Back in March, Grimlore Games from Munich published an article with news about modding tools for the RTS-RPG SpellForce 3. New modding tools have been added for the standalone-expansion Fallen God, which allows players to create custom campaigns. Maps, quests, dialogues and many other aspects of gameplay can be modified with the new Articy tool. As a possible base for custom campaigns, Grimlore Games offers the scenario map Old-Haayâlash with script and level editor files – and in the future more content will follow. Players can also design their own campaigns. Guidance is available in the detailed (!) Quick Start Guide from Grimlore Games. Currently, Grimlore Games is also focusing on a previously unannounced new project and has also released a large patch for SpellForce 3 Fallen God in April, into which a lot of feedback from the community has flowed. The Platinum Edition of the original SpellForce with three game titles also received an update in April, and we are eagerly awaiting more news from Grimlore Games.

In March, exactly one year after the release of Avorion, Boxelware from Erlangen released the update 2.0 for the space sandbox game, which you can purchase here on Steam. In Avorion you build your own spaceships, fight huge space battles, explore the galaxy, trade, fight wars and create your own empire together with other players to protect your galaxy from destruction by an unknown enemy. Check out the News Hub on Steam and this trailer to learn all about the features of Update 2.0, which improves many things about Avorion and makes it feel like a new game in many ways. Improvements include new progression, a classic and a configurable scenario, captains, improved AI commands, UI updates and quality-of-life changes.