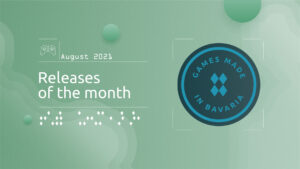 #GamesInBavaria Releases of the Month August 2021

The month of August is usually dominated by the gamescom – the second virtual edition of the game fair gave us a lot of news from the ranks of Bavarian gamedevs. New demos of future releases and Steam pages with the invitation to wishlist make up a large part of the news. That’s why we have the links to these pages for you today, as well as news and announcements about releases and updates of games developed or published in Bavaria.

We forgot about your release? You have a release or an update for a game coming up? Then send us a mail and you will be listed in the news for that month.

At the gamescom, many game developers launched the Steam pages of their games or made updated demo versions available. For example, there were streams with the latest demo version of A Juggler’s Tale from publisher Mixtvision. A Steam page has also been available since the gamescom for the atmospheric platformer adventure game White Shadows, which Mixtvision is co-publishing with Headup. The third new title from the publisher with its own Steam page is the rhythm-based game Onde.

Another new Steam page has been launched by Emergo Entertainment for the wholesome survival game Fireside, along with a new demo version of the title. You can sign up for the playtest on the Steam page. Thera Bytes is also looking for alpha testers for Zombie Cure Labs via the new Steam page. You can participate by registering on the Discord of the company from Munich.

The Orphan: A Pop-Up Book Adventure by Besworn Games also has a Steam page now, where you can download the demo version of the game. The same goes for Nura’s Wish by Young Wolf Interactive – add the title to your wishlist and download the demo to shorten the waiting time until the final release.

During gamescom, a demo version of Elemental War II by Clockwork Origins was available on the company’s website – and here’s the Steam page for the title, which you’d best wishlist as well.

Pixel Maniacs: King of the Pit

King of the Pit by Pixel Maniacs has been available for free download for four years now, but in August the free-to-play Twitch extension also got its own Steam page and thus celebrates a second release. In the low-poly beat-em-up raffle game, viewers can join the virtual mosh pit and rock out using !dance Command. Viewers outside the circle can even throw bottles at the dancers and thus influence the course of the game. A setup tutorial is also available for download and the game was originally created during a gamejam.

With publisher Kalypso, Munich-based Realmforge Studios released the “Festival” DLC for Tropico 6 at the end of August, giving each of the four eras in Tropico 6 its own festival grounds with over 20 festival variations to keep Tropicans happy and benefiting from positive effects such as the conversion of knowledge points to money. A new scenario-based campaign awaits players as well as eight new buildings (including a balloon factory), four new songs, three new edicts and two new customization options for El Prez and his palace.

Launching a new gaming console in the midst of a pandemic is probably not a best-case scenario. Nevertheless, Intellivision is preparing with great anticipation for the launch of its new console, Intellivision Amico, with the announcement that pre-ordered units are expected to ship by the end of 2021. To that end, Intellivision Europe President Hans Ippisch also shared USK-cleared packshots of eight physical products that will be available at the console’s launch, which are also now available for pre-order in Germany. Some products from Bavaria are also already available at launch or will ship with the console. Over 20 launch titles will be produced in Europe in total. The FFF Bayern and the BMVI funded some of the products.