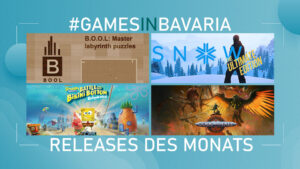 #GamesInBavaria Releases of the Month January 2021

We found a total of four releases of Bavarian games and updates or releases from Bavarian publishers online in January. This makes January the quietest month so far after the long Christmas vacations. For February, however, the list of pre-announcements for updates and releases is already longer than today’s article and we are happy about the four releases as well as about exciting news in the coming month.

Did we forget a release or do you have a release coming up soon? Then feel free to send us an email to [email protected] or contact us on Facebook. You are also invited to exchange ideas with other games companies in the Facebook group Gamesgrantler – The Games/Bavaria Community Group. We are also happy about a follow on Twitter and LinkedIn.

Bavarian publisher Deepsilver (Koch Media GmbH) announced the release of the Manchester-developed indie game Gods Will Fall at the end of January. In the dark fantasy action game Gods Will Fall, developed by Clever Beans, eight warriors, each equipped with their signature weapon, take on the challenge of bringing the dark secrets of the ancient gods to light. The combat system is quick to learn, but only players who fully master it will have a chance to emerge victorious from this dramatic battle. You can find the launch trailer here on Twitter.

The small indie developer team of Michael Wührer released the remake of the game B.O.O.L. – Box Out Of Labyrinth for New Nintendo 3DS™, New Nintendo 3DS™ XL and New Nintendo 2DS™ XL in January. The remake is titled B.O.O.L.: Master labyrinth puzzles. The objective of the game is to get the box out of the maze to the finish line. The game box cannot be moved freely, only up, down, left and right and only to the next obstacle without stopping in between. Also, you only have a certain number of moves available in the total 120 maze puzzles. More information can be found on the website.

Last month HandyGames released the mobile game SpongeBob Square Pants: Battle for Bikini Bottom Rehydrated. In the app for iOS and Android, players take on the role of the SpongeBob character and show the evil Plankton that crime doesn’t pay. You’ll protect Bikini Bottom from robots that have gone wild by using your powerful bubbles and practice bungee jumping in your underpants.

WastedStudios released an update for SNOW – The Ultimate Edition on Steam in January, updating visual effects in particular. SNOW is the only open-world winter sports game. You’ll explore a huge mountain on snowboard, skis and snowmobile, customize your character with clothes and equipment, and take part in competitions. Or you can go on your way and explore the mountain.