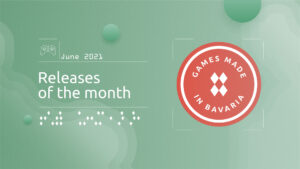 #GamesInBavaria Releases of the Month June 2021

Both Early Access and non-Early Access releases, as well as updates, are all in the June edition of the Releases of the Month with ten exciting titles, all of which we can warmly recommend to you on these hot days. Go on patrol with the police, oil your vocal cords, save some pammies, play with dinos, solve puzzles and let yourself be carried away into wonderful worlds. Have fun with the #GamesInBavaria releases of the month!

As always, if you have a release or update coming up, send us an email and you’ll be in the news.

On June 17, Aesir Interactive released Police Simulator – Patrol Officers on Steam in Early Access. The team decided to go with the Early Access version in order to involve the community in the development at an early stage, as the FAQ section on the website reveals. The game welcomes you in Brighton. You will join the Police Department of this fictional US city and experience the diverse everyday life of a patrol officer on the streets of the metropolis. The first update for Police Simulator – Patrol Officers is already in the starting blocks and you can participate in the open beta for the background check update now, which is scheduled for release on July 13. You can get even more insight into the roadmap for the game here on Aesir Interactive’s public Trello board. Stay up to date with the latest news via Twitter.

Moebiusgames from Munich released Panic Mode in Early Access on June 25th. Here on Steam you can get Panic Mode starting today and save the Pammies from certain doom. Panic Mode is a casual simulation and strategy game in which you have to save the Pammies – cute, lemming-inspired and accordingly chaotic creatures. You protect the Pammies from certain doom through more or less everyday disasters and from their own incompetence, but you have rather questionable crisis management tools at your disposal for this. On the website you can learn more about the game and about the machinations of Pamperümpel Industries™, which do not exactly make your rescue attempts easier.

One Hand Clapping from the publisher HandyGames from Giebelstadt also went online in June as an Early Acces version. You can get it here on Steam. In the extraordinary 2D platformer, you solve musical puzzles and change the world around you by controlling the character and events with your voice. The game gives you the freedom to evolve with the game mechanics and helps you build confidence in your singing voice and the voice inside you. You can learn more about One Hand Clapping on the website.

Munich-based publisher Mixtvision released the extraordinary narrative puzzle game Minute of Islands in June. The game is available for all major platforms and you can purchase it here on Steam. In this game you explore wonderful strange islands and dark labyrinths in the depths. Join the young mechanic Mo and help her repair a world that is on the verge of destruction. It may take more than the powerful Omni Staff – which you’ll use to control the giants’ machines – to face the dark truth hidden there in the depths. A Behind the Scenes with animators is available here on YouTube, and content creators can get in touch here if they’d like to cover the game.

Upjers from Bamberg introduced the expeditions feature to the browser game My Free Zoo at the end of June. Head to new shores, explore new mountains and regions: You can now unlock a map in My Free Zoo and set off on expeditions there at your whim. For your explorations, you’ll receive rewards like exclusive decorative items and an animal that’s exclusive to this new feature. Read more about it here.

In addition, there is the dino game for tycoon fans Dinosaur Park: Primeval Zoo in addition to Google Play now also for iOS. You can learn more about the game here.

CipSoft from Regensburg released the biggest update so far for the blockchain game LiteBringer in June. With update 11 come weekly and daily quests, new resources, legendary quest series, another service for calculating high scores, a completely new tier, improved mechanics and many other things. At release, all game players with a subscription received 600 free transactions. You can also try LiteBringer for free now without owning the cryptocurrency. CipSoft shows the impressive impact of the update with the SegWit usage of Litecoin.

Travian Games released a dungeon update for Arkheim – Realms at War in June. On June 10, S10 launched with a dev livestream and dev diary for Dungeon 2.0, including background story, stages, and new dungeon structure. With S10, the dungeon has undergone a major overhaul, offering a more diverse and exciting PvE experience. Make choices, make your own individual path through the demon hordes, pick up valuable loot, and discover ancient, forgotten secrets of Arkheim. Also take a look at the community calendar for July and discover the dungeon.

Suspicious Games from Nittendorf invites you to download the open beta of the mobile game Zauberzirkel (magic circle) from the Play Store now and test the game. In Zauberzirkel you play a sorcerer’s apprentice whose task is to prove his skills in a tower occupied by monsters. As an apprentice, you’ll have to remember the spells you’ve learned and use them tactically against monsters to climb the endless tower as far as possible. The team is happy to receive feedback on the game here.

SenAm Games from Munich is currently working on the noir-style graphic novel Hauma, but along the way the team has also released two German learning games for the browser in cooperation with the Goethe-Institut. The games Der Superhelden-Campus (the superhero campus) and Undercover-Mission im Krankenhaus (undercover mission in the hospital) are available on the website with further German exercises.