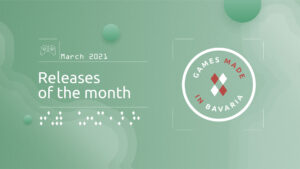 #GamesInBavaria Releases of the Month March 2021

Here they are, right after the Easter holidays: the releases of the month. Spring is picking up speed and in the Bavarian game development and publishing forges there is a lot of updating, pushing, deploying and publishing going on. We present you eight releases of games or updates made or published in Bavaria in March. As always: If we have forgotten you or if you have a release coming up, please drop us a message and you will be included.

On March 19, Pixel Maniacs celebrated a wild release party for the launch of the multiplayer party racing game Can’t Drive This on all planned platforms –Steam, PS4/5, Nintendo Switch, and Xbox. In Can’t Drive This, one person playing is behind the wheel while the other person builds the track… all at the same time. Can’t Drive This is a competitive co-op game where you drive a monster truck while the track in front of you is being built. By the way, if you drive too slowly, you’ll explode, so don’t take your foot off the gas pedal. It gets especially chaotic when four players are building and racing at the same time via split-screen. The FFF funded the game, IGN awarded 7/10 points and Can’t Drive This is one of the 12 games that help against lockdown boredom, according to SPIEGEL ONLINE. By the way, the idea for Can’t Drive This was born at a Ludum Dare game jam in 2016 and the first prototype was created within 72 hours. We are big fans of game dev stories like this one and wish you a lot of fun with the title.

Space ship business simulation and building game paired with a generous pinch of humor: That’s Spacebase Startopia from Realmforge Studios. You can buy the game directly on Steam or via the Kalypso store. The single-player campaign includes ten missions in which you have to create one of the most attractive trade and tourism magnets as the commander of Spacebase Startopia. Your base includes three decks that need to be managed… and you’ll have to defend yourself against economic sabotage or attacks with mech units. Oh yes, there are also space pirates who want to thwart your plans. A dynamic narrator AI will help you with words and deeds. Besides the missions, there is a sandbox mode and a competitive or cooperative multiplayer mode for up to four people. You can watch the recording of the release livestream here and you can find a strategy guide for the game on YouTube here.

El Hijo – A Wild West Tale is a spaghetti western stealth game in which you take on the role of a 6-year-old boy who goes on an adventure in search of his mother. Publisher HandyGames released the game on Steam, Stadia, PS4, Xbox and for the Switch on March 26, which is also nominated for Best Family Game at the DCP. On your journey, you’ll sneak past dangers and enemies in a very family-friendly way, and find yourself in a remote monastery, a harsh and unforgiving desert strip, and a border town full of crime and villainy. Check out the release trailer on YouTube here.

Travian Legends version 4.6 was released in March. You can find an overview of the new features in the linked blog post and here on Facebook. In 4.6 you can expect new technologies, new regions & tribes, a server rotation, changes to the map size and a new task system. There were also bug fixes in March as well as an update to the game rules and a very long changelog to the last patch. You can learn more about the expert strategy MMO here on Facebook or on the Travian Legends blog.

The correct title would have been Arkheim: Realms at War War & Peace Update, but there has actually been more going on in Arkheim since its release, so we’ll briefly summarize the past updates for you. The new War & Peace system in the team-based strategy MMO with dwarves and elves sets clear goals and opens up new diplomatic and strategic possibilities. Friendship recommendations and new languages are also new. In March, the player round S8 also went live and here in the dev stream you can find information about the current changes in Arkheim. You can also learn more about the updates in the Dev Diary on the Arkheim website or in the videos on YouTube (e.g. the gameplay trailer here) or in the streams (e.g. the latest community stream here). The patch notes for the current update from March 29 can be found here.

Publisher Upjers and developer King Art expanded the free-to-play game Zoo 2: Animal Park with a second animal park in March. The zoo simulation game is available as a browser game and as an app. In it, you’ll meet cute animals, play an exciting story with entertaining missions, and expand your zoo with unique design options. Here on Facebook you can find an overview of the current updates and events (e.g. for Easter) and learn which rare animals and color variants you can earn for your zoo and how. How about Easter in Japanese, for example?

NeoBird developed it and Upjers published it: the entertaining app Bingo Park for leisure casual gaming. Now the free app is also available in German in the Google Play Store and shows that bingo can be fun not only for the senior generation. With mini-games and new bingo rooms you can reach high scores and play bingo against other players. You can find the video for the app here.

Although it is actually just a side project of the studio, there are regular updates and you can download the game for free. In Alchemy World you combine two elements to create a new element. You share the new elements with the whole world in the multiplayer game. Feedback and questions can be posted on Discord and an overview of the latest updates can be found here on Twitter.