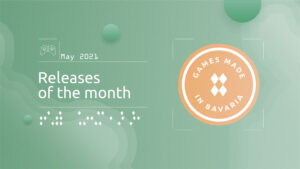 #GamesInBavaria Releases of the Month May 2021

Ten releases and updates made it into the monthly overview of new titles developed or published in Bavaria this mail – including stragglers from a previous month. Join us on a journey from horse adventures and farm idylls to action-packed games, AR/VR games and a blockchain title. As always, if you have a release or update coming up, send us an email and you’ll be in the news.

Wild River Games from Munich has released Horse Club™ Adventures in May. You can expect a vivid, colorful and detailed world with many familiar and new characters and the locations from the Horse Club™ world. 40 main missions and 30 optional side quests will guide you through the horse world, where you can also discover mini-games, unlock outfits and embellishments for the heroines and their horses before venturing out on the 90 race tracks. On Facebook you’ll find numerous videos and information about the heroines, the horses and the tasks, as well as clips from the cheerful soundtrack. The open-world horse adventure game is available for PC and consoles. Click here for the release trailer.

After LiteBringer, CipSoft released its second blockchain game in May: the prototype NFT Boss Battles is now available online. NFT Boss Battles is a co-op game on the Binance Smart Chain with fast and cheap transactions. You collect heroes, level them up and send them into joint battles against powerful bosses and get epic loot. Each hero is unique and implemented as a Non-Fungible Token that can be freely traded for Binance Coin. The game can be played directly in the browser and delights with 2D retro pixel graphics. You can learn more about it on Twitter.

Iron Harvest from the publisher Deep Silver has received the first add-on called “Operation Eagle” in May. You can find the release trailer here. The faction Usonia with its “dieselpunk airships” lands on the battlefields of Iron Harvest in the first add-on for the RTS Iron Harvest. Not only does this bring the new Usonia faction to the game, but also new multiplayer maps as well as an extensive Usonia single-player and co-op campaign. The add-on has been released on Steam (also as a standalone version), GOG and Epic. The plot in Iron Harvest is set in an alternate reality in the time around 1920+, shortly after the end of the Great War.

The Twitch streamer game Viewergames Arcade by Spaceflower has received an update from the “Straßenbauamt” (race committee) at the beginning of May. Viewergames Arcade is a racing game that can be played live in a stream. Streamers can control the game, set waypoints and fire items via a Twitch extension. Viewers can use Channel Points and Twitch Bits to participate, support the streamer and earn goodies. Both the game and the extension have been updated, including revised tracks, a new map and new features. You can find a short video about it here.

Upjers from Bamberg released the farm RPG Farmer’s Fairy Tale for Steam at the end of May. You take on the role of an unusual heroine, build your own farm, solve exciting quests and discover a mysterious fairy tale kingdom. You will find yourself in the middle of a fairytale environment and receive a mysterious task. The mayoress asks you to build up a small dilapidated farm. As a contact person, you’ll have her Adlatus at your service, and in the course of the game you’ll meet numerous whimsical characters who will support you. Farmer’s Fairy Tale is a unique mixture of farming simulator and RPG – here you can find a short video.

Clockwork Origins‘ tower defense game Elemental War is now available for PS4 without multiplayer mode. Three innovative game modes, five difficulty levels, seven scenarios, countless maps and enemy types – the single player offers you everything it takes for long-term gaming fun. Compete with other players in rankings and learn the tricks of the best via the detailed rankings. Use the included editor to design your own maps for you and other players. You can find gameplay videos here on YouTube.

Back in March, UIG Entertainment released Airport Simulator 3 Day & Night and Digital Deluxe Content as additional content. The airport is a place that never sleeps: departures, arrivals, colorful passenger hustle and bustle around the clock. At the airport, there is rarely an opportunity for a break. In Airport Simulator 3: Day & Night, you’ll face the challenge of keeping the wheels turning and ensuring smooth operations at all times of the day and night.

Rappbit won an award at the DCP for its prototype of Mukana, and the team released update 0.8.0 for the app (iOS and Android) in May with all-new troops and buildings. Mukana is a location-based mobile real-time strategy game with a significant focus on social networking within the community with clans. You loot and gather resources in the real world and create your own empire. There are over 1.1 million special locations in the ever-expanding world.

HOLOGATE is launching Blasters of the Universe: VR Bullet Hell to over 400 stations in 36 countries worldwide. Blasters of the Universe: VR Bullet Hell is a highly styled VR shooter that can be played cooperatively by teams of up to four people. While playing in a retro 90s-style virtual environment, players must survive successive waves of bullets and bad guys. To add to the immersive shooting experience, you can choose between five unique weapons to face off against the baddest boss in the universe. You can find a trailer here and the original announcement here.

Demon Trip was originally developed as a student project at the Mini Beans Jam 2020. Programming, sound design and animation were done by HighPassionStudios from Schwanfeld, Germany, and the graphics were contributed by Nightingames artist Antonia Schmidt. The sidescroller inspired by Flappybirds was already available on itch.io and now you can download the game for Android in the Google Play Store. In it, you fight your way through space to Earth and have to overcome hordes of angels and meteor showers. The music is synced to the level design and a trailer video can be found here.