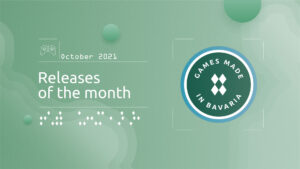 #GamesInBavaria Releases of the Month October 2021

We have collected five exciting releases with games from Bavarian developers and publishers for you in the month of October. Compete in space missions and defend yourselves against attackers, solve mysterious cases with supernatural horrors, fight against really dangerous zombies, solve puzzles based on a familiar cube (but still quite different), and learn the basics of foreign languages with colorful balloons. Have fun with your releases of the month!

We forgot your release? Do you have a release or update for a game coming up? Then send us an email and you’ll be in the news for that month. You want to talk about game development and publishing in Bavaria? Then join the #GamesInBavaria Discord server and meet like-minded people from the Free State.

In cooperation with NeoBird GmbH, the Bamberg-based developer and publisher upjers released the game Galaxy Splitter for Android in October. In this vertical shooter you will get to deal with numerous enemies. Their spaceships are very well equipped and the squadrons are ready to stop you in your mission. Your shields won’t last forever – so beware of missiles and projectiles. Go here to play Galaxy Splitter in the Play Store and there’s a tutorial here at upjers.

In late October, publisher Giiku Games released the visual novel Hermitage on Steam and for Xbox, PlayStation as well as the Switch. You investigate mysterious cases by taking on the role of a former anthropology professor and less-than-motivated bookstore owner who, for reasons unknown, has never been seen outside his bookstore. With the help of a hacker genius on the run, a self-styled detective, and an irascible legal advisor, you must get to the bottom of a series of horrific incidents, taking into account the supernatural horrors lurking within the pages of Lovecraft’s book collection at Hermitage.

Just in time for Halloween, HOLOGATE released the VR game ZOMBYTE 2.0. In it, up to four players join together to form a Z.W.A.T. (Zombie Weapons And Tactics) team and go into adrenaline-fueled battle against wave after wave of incoming hordes of infected undead. ZOMBYTE 2 promises even more grabbing, biting, slashing by a new batch of the most unimaginable ghastly creatures for mind-blowing fun. Here’s the trailer video.

Some projects take a little longer than expected: Cubiverse started in 2016 as a student project and has been released on Steam since October 2021! Congratulations to the team and we give both thumbs up for so much staying power. Each planet in Cubiverse is based on the magic cube, with three rows to rotate. The twist is that the goal is not to get all the tiles of the same color on one side. Instead, you help the little astronaut Euler collect a crystal and bring it back to the spaceship. You’ll have to control Euler’s movement via the cube and rotate the rows on the planet to solve these puzzles.

Developer of kid-friendly educational games McPeppergames released Balloon Pop for the Nintendo Switch in October. In it, you pop funny balloons while learning different languages through play. Children can adjust the size of the balloons and the speed at which they fly. Thus, the game is suitable for children of all ages. The game contains educational language editions in 14 different languages and children learn the numbers from 1 to 20, the complete ABC, the most important geometric shapes and the most important colors.