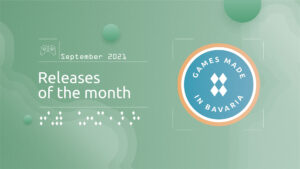 #GamesInBavaria Releases of the Month September 2021

After rather few releases and updates in August, our news article for September is packed with many exciting news from the games developed and/or published in Bavaria. We have a total of fifteen (!) new releases, major updates or new releases on other platforms for you in the news this time. Look forward to the bad weather days in October to try out all the different games at your leisure. Have fun with the releases of the month!

Have we forgotten your release? Do you have a release or an update for a game coming up? Then send us an email and you’ll be included in the news for that month. You want to talk about game development and publishing in Bavaria? Then join the #GamesInBavaria Discord server and get to know like-minded people from Bavaria.

In September, Mixtvision released the multi-award-winning story-driven indie adventure A Juggler’s Tale for PC and consoles. Set off on an adventure in which you guide Abby, the puppet, through an enchanting yet sinister fairytale world. Solve puzzles, avoid traps and escape from pursuers. Abby is a circus performer who is being held captive against her will. During the day she entertains the circus visitors and at night she is locked in a cage where she dreams of her freedom. One day she escapes from the circus and sets off to explore the magical fairytale world. Can she take the threads of her fate into her own hands? Here you can find the release trailer.

Strictly speaking, Bus Simulator 21 by stillalive studios GmbH and astragon Entertainment GmbH was not developed in Bavaria or published from Bavaria. Nevertheless, there are strong connections to the Bavarian capital: remote control productions CEO and founder Hendrik Lesser has been chair for the development team of stillalive studios GmbH from Austria since 2021. The company is part of the development collective of remote control productions and has thus been closely linked to it since day one. In Bus Simulator, you drive buses from a fleet of 30 vehicles from renowned brand partners in an open world with maps from Europe and North America. Different difficulty levels and game modes appeal to different types of players, e.g. the cooperative multiplayer mode. The game has been available since September in three versions and with four additional contents on Steam, in the PlayStation Store and in the Xbox Store. A video playlist with the trailers can be found here on YouTube.

Salmi Games released the roguelike VR shooter Sweet Surrender on Steam and Oculus in September with this release trailer. Sweet Surrender is a roguelike shooter set in a dystopian mega-tower. There you must adapt to a merciless, fast-paced, action-packed environment. Agile combat, upgrades and enhancements, and procedurally generated levels provide action and excitement. Sweet Surrender VR was funded by the BMVI and you can also find all the links to the game here in the Salmi Games newsletter.

In September, Travian Games celebrated the 17th birthday of Travian: Legends. As every year for the day of honour, there was an annual special for all players, which this time conquers the Game Worlds under the title Tides of Conquest – new worlds with the special will be launched until 14 October. In addition to a five-part story on Tides of Conquest, community calendars and giveaways, the special also offers exciting new features. The strategy MMO is aimed at experts of the genre worldwide with epic battles and numerous strategic challenges. Here you can find the trailer for Tides of Conquest and numerous other Travian videos.

Since September, the game Ooops! 2 by Wild River Games based on the popular movie has been available for Nintendo Switch, PS4 and XBox. Click here to watch the trailer on YouTube. You take on the role of Dave or Kate and provide the hungry crowd on the ark with ever new delicacies. As the master chef for the entire flock of animals on the ark, you’ll have your hands full to keep the mouths full. Prepare all kinds of dishes and unlock popular characters in this action-puzzle game for one player with original sequences from the movie. More impressions can be found at Wild River Games on Twitter.

Travian Games celebrated the global launch of Arkheim – Realms at War in September with a developer livestream, the Alvorsted (S13) update and an official trailer. Arkheim – Realms at War is a team-based 4X strategy game in which players must unite in realms to conquer Arkheim. You command powerful warlords, train huge armies and wage massive wars against numerous neighbouring realms. Only by collecting enough of the mighty Moonstones will you be able to climb the floating islands to reach your common goal: The ascent to the Eternal Light.

The team at Active Fungus Studios released the Early Access version of the playable Bavarian crime thriller Totgeschwiegen – Kapitel I (in English: Hushed up – Chapter I) on Steam last month. In this third-person RPG, you explore rural Bavaria in 1866. As physics expert Valentin Schmidt, you travel to the tranquil village of Wolpertshofen when a sudden death throws the entire village into turmoil. Through exciting dialogues, fighting mechanics for defence and detective mechanics for the hidden clues, you solve the criminal case with Bavarian humour. Videos of the game can be found here.

In September, HandyGames gave the award-winning and FFF-funded VR strategy simulation building game Townsmen VR a major update. The team describes the implementation of numerous new features that stem from requests from the community as a complete overhaul – including a fully voiced story campaign on 13 islands. Townsmen VR uses the exciting possibilities of virtual reality to enrich the classic building game with completely new playful experiences and interactive mechanics. Watch the showcase video here and download Townsmen VR on Steam here.

Together with United Soft Media, Nementic Games from Munich has released the game EXIT – The Curse of Ophir, which was funded by FFF Bayern. You can find the trailer here. With the app for iOS and Android, you can experience the EXIT game as a single-player game. You slip into the role of an amateur detective who is searching for the whereabouts of a famous writer. Your trail leads to an old and mysterious gold-mining hotel in the Wichita Mountains. All the items you collect on your journey can be examined and manipulated as 3D objects in your inventory. The hotel itself features handcrafted 2D backgrounds for each room the players explore.

In September, Boxelware released the eagerly awaited update 2.0 for the space sandbox simulation game Avorion. You can also get an overview of the new features here in the trailer and here you can get the game on Steam. In Avorion you build your own spaceships, fight huge space battles, explore the galaxy, trade, wage wars and create your own empire together with friends to protect your galaxy from destruction by an unknown enemy. In Avorion 2.0 you can expect a new progression, the new player profile, numerous quality-of-life improvements, streamlined features and much more. Screenshots of the great spaceships from the community and much more can be found at Avorion on Twitter.

As a publisher, Toplitz Productions released the action-adventure sim-RPG Medieval Dynasty in September. It takes you to Europe in the Middle Ages. The mysterious Occident awaits you, ruled by nobility and clergy. Here, trade between nations has brought not only prosperity, but also envy, greed and mistrust. Use the ever-changing environment to turn your small piece of land into a home and your village into a thriving city that will stand the test of time. Establish a dynasty with your descendants and rule your own kingdom for generations. Find out more on Tiktok, Reddit and in your own cookbook on Steam.

Koch Media GmbH publishing label Prime Matter released the post-apocalyptic sci-fi RPG Encased for PC in September. Encased is a classic isometric, tactical sci-fi RPG set in an alternate 1970s world where a gigantic and unexplained object – the Dome – is discovered in the desert. You fight enemies, explore a land full of anomalies, develop your character and join a faction of this destroyed world. Here you can find the corresponding press release and here you can find the YouTube playlist for Encased.

McPeppergames from Münnerstadt released the Funny Farm Animal Jigsaw Puzzle Game for Kids and Toddlers for the Nintendo Switch in September. This animal puzzle game was developed especially for children and includes different levels of difficulty that can be freely adjusted. In addition, help functions can optionally be switched on or the rotation for the puzzle pieces can be switched on. The puzzle game contains many great, fun and unique animal motifs suitable for children. Also new and suitable for little ones: The Animal Puzzle game for Nintendo Switch. The educational plug-in puzzle game with child-friendly motifs is aimed at children of kindergarten and preschool age. Both games support touchscreen functionality only.

In September, Shin’en Multimedia released The Touryst, an action-adventure game that was first released at the end of 2019, for PS4 and PS5. As a tourist on the Monument Islands, you discover exotic areas above and below water, explore mysterious ancient monuments or have fun shopping and partying. You can find the trailer for the game here.