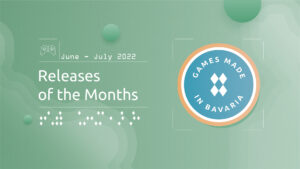 #GamesInBavaria Releases of the Months June to July 2022

It’s time again to celebrate new releases! With this post we unite all games that had a release reported in the months of June and July. Shortly before gamescom, we would like to present you four games this time. We move between forests and animals to cursed and dark tales. We wish you a lot of fun with your releases of the months!

Lumberjack’s Dynasty by Toplitz Productions was already able to celebrate its first release in April 2020. In June of this year, Toplitz Productions announced that it was once again time to pull out the plaid shirt: Players can now find Lumberjack’s Dynasty for Playstation and Xbox. Put on your hat and pick up your axe to enjoy the unique blend of life-, economy-, and lumberjack simulation in the console version of the game.

Nementic Games and USM also announced a new platform release: EXIT – The Curse of Ophir was already available for mobile devices in 2021. In June 2022, however, the developers announced that the game will now also be released on Steam. This version is described as a faithful adaptation of the mobile version, but some adjustments exist to optimize the experience for PC. More specifically, the puzzles have been improved and settings have been changed. Furthermore, you can now collect the well-known achievements on Steam.

This great first release should have already crossed your path through various social networks or websites: Herobeat Studios, in cooperation with HandyGames, released the game called Endling – Extinction is Forever. A deeper storyline accompanies you on your way: As the last fox in this world, you have to take care of yourself and your cubs. In addition, this merciless world is slowly destroying itself. In this 3D sidescroller, you’ll experience an environmentally conscious adventure, as you’ll be shown how mankind is destroying the Earth. In the process, the valuable materials in nature that are essential for survival are destroyed day by day. The game’s cute graphics lighten up the horrible but realistic story a bit – but it also shows what beautiful creatures are being destroyed by us humans. Are you ready? You can find the game on Steam here. The successful release of the game was also celebrated with a party of the companies.

Slightly lighter food (literally! – German proverb) awaits you in Banana Kong 2, which celebrated its first release on July 12, 2022. FDG Entertainment presents the successor of Banana Kong almost ten years after its first release. Now you can move back into the jungle and marvel at a completely new 3D world. A dexterous and fast gameplay awaits you, as you’ll have to run, jump and swing from vine to vine. New locations await you, such as lagoons and even the North Pole! A video of the gameplay can be found here. As with its predecessor, you can find the game in the App Store and Google Play Store.