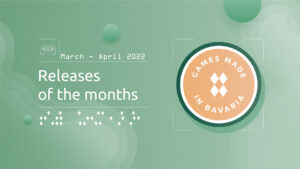 #GamesInBavaria Releases of the Months March to April 2022

Two months have already passed since we were able to present you eleven games that had previously celebrated their release in the last releases of the months. In this article, we also combine more than one month this time and would like to show you the new releases of the months March and April. A whole eight games or expansions of already released games have been released in these two months. From cute animals, to job-oriented questions, to rhythmic puzzles, we have everything this time. We wish you a lot of fun with your releases of the months!

Right at the beginning of March, the child-friendly game Pets: Homerolling by HighPassionStudios was released. The game can be downloaded on all common Android devices and uses the executable swipe motion of these devices: Players have to navigate the selected pet skillfully past obstacles with targeted shots to reach the goal. By achieving different high scores, new pets with different abilities are unlocked as rewards. The game offers different modes (10- and 30-shot, as well as time-based with no shot count), so despite the simple mechanics, a varied gameplay experience is achieved. This is also reinforced by the 1000+ unique levels, which are based on procedurally generated programming. You can find the game’s cute release trailer here.

“Welcome to the Labyrinth, Space Trucker!” On the 2nd of March, the VR puzzle game called Labyrinth deLux – A Crusoe Quest was released by Enigma Film and K5 Factory. Here, players find themselves in the role of space trucker Robin, who finds herself in a temple-like environment through a wormhole. From here, you must decipher 16 different rooms by navigating a laser beam through the winding corridors. To do this, you can use rotating mirrors and prisms and connect lasers of different colors. To explore the rooms and find hidden mirrors, you can also teleport along the walls of the rooms. Robin is accompanied by her artificial assistant named Freitag (Friday), who will help you decipher the stone columns. You will also learn the story behind the labyrinth. The narrative of the game is conveyed in a funny and at the same time mysterious way. You can find the game on Steam here. The game was supported by the BMDV.

Mixtvision, Lance and 3-50 take you on a relaxing and musical experience as you learn how to create paths of light and sound in ONDE. You will follow this path through the graceful world where colorful swirls and spherical sounds intertwine. Players will experience this world in their own personal way, auditorily and visually recognizing how the wondrous world comes to life. They can follow their personal rhythm in the puzzle game. The soothing sounds provide a meditative experience. Players explore worlds with different themes; from the deep sea to outer space, everything is there. In particular, the abstract and elegant design stands out here, which together with the relaxing sounds unites in a perfect harmony. You can see this here in the trailer. You can find the game here on Steam and here on GOG.

Let’s stick to VR games: After a small delay of the targeted release, HandyGames was able to present the long-awaited full release with version 1.0 of the game Townsmen VR on March 24. The successor of the Townsmen series combines the classic building game with the brand new possibilities of virtual reality. You can enjoy a lot of different quests and also the free play mode. In Townsmen VR, you will find yourself on an island world that you can explore. The interactive VR controls can be used for the different perspectives. Through virtual tackling, you can build 23 unique buildings and continuously improve them. The game’s voice-over story stretches across the 13 islands. An economic structure is created through the tasks of the villagers, such as trade and deliveries. You can see how much fun you can expect in this video. You can find the game here on Steam and here in the Oculus Store.

Thera Bytes was able to share the release of their project PlayMINT on March 23. The serious game is intentionally designed to introduce female students to entrepreneurial careers in STEM (= MINT in German) fields. The idea for the game came from the Chair of Strategy and Organization at the Technical University of Munich. The relevance of the project lies in the fact that, according to reports from the Federal Employment Agency, the proportion of women in STEM professions is only 15%. It continues to show a significant underrepresentation of women in leadership positions at 4-5%. The TUM wanted to address the issue of this unequal gender ratio. PlayMINT aims to facilitate the transition from studies to STEM professions for female students. At the same time, female STEM students are to be trained as future leaders. Through the digital learning game, an insight into product development and leadership and management activities is to be provided. Theoretical concepts (e.g., the product life cycle) and individual skills (e.g., effective communication) are to be taught playfully using a new business idea of the medical robot “Surgebot.” The effectiveness of the game has been scientifically studied. The results show that PlayMINT increases innovative work behavior, creative self-efficacy and effective communication in the medium and long term. You can play the game directly in your browser here.

There is also a new adventure from Die drei ???: United Soft Media Verlag (USM) published the detective adventure Die drei ??? – Plan der Chamäleonbande (The Three ??? – Plan of the Chameleon Gang) on April 06. Join the protagonists Justus, Peter and Bob as they try to track down the people behind the wave of sophisticated robberies. The perpetrators, the “Chamäleonbande”, are well camouflaged. You find out that the burglaries coincide with the tour schedule of a popular singing duo. Because of this, Bob has the idea to follow the tour undercover. The result is a completely new case for Die drei ???, which has not yet been found in (audio) books. In the process, you’ll move around in familiar and new locations between Rocky Beach, the Californian wine-growing region and San Francisco. To buy the game, USM has created this handy link, through which you can find all the stores.

Finally, we have two small additions or revisions: reFit Systems have a new game to show off for reFit Gamo: In their LinkedIn post, they demonstrate the game Chicken Guide. In this game, patients must be completely focused in order to help the chickens reach their destination safely. As with the other games from reFit, the aim is to support the (movement) therapy of patients in a playful way.

Finally, we would like to present you an update: Wegenbartho Games has shared on Steam that the third chapter of The Donnerwald Experiment is playable since March 15. With the update you can expect bug fixes, adjustments to the story and also new playable characters. Additionally, small balancing changes were made to the already existing characters. You can get a sneak peek of what to expect in the third chapter by watching the trailer video.