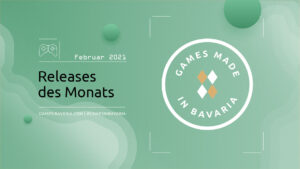 #GamesInBavaria Releases of the Month February 2021

A bit later than usual, but already in the fancy look of the new website, here are the releases of the past month for you. In this series we present you the new games from developers and publishers and updates to video games that are developed in Bavaria. For February 2021 we have one new game, two updates and two Kickstarter campaigns for you, which are looking forward to support. As always, but this time especially due to the website launch, if we forgot an update or release, feel free to send us a message and we’ll update the news.

In the Newsflash (German) we already briefly reported on NEPO Missions by Gentle Troll and today we present the project to you in more detail. In the serious game, players control the rover Rosa and accompany it on its Mars mission, based on the ESA ExoMars mission. In this way, they learn to better understand the planet and at the same time how to program in the graphical block-based programming language “NEPO” from Fraunhofer IAIS. The programming language is used to control the rover. In Mission 1, players complete tasks related to Rosalind’s landing on Mars and work their way around the planet using the code. NEPO Missions is deployed on the Open Roberta Lab platform, where millions of people worldwide already program real-world robots each year. NEPO Missions was awarded in the Google.org Impact Challenge.

This image should look familiar if you’ve ever taken a look at the new Games/Bavaria home page. The sci-fi Hyperion and Helios from Tri6: Infinite is part of one of our key visuals (only real with the diamond). The Endless Racer has also been available for the Nintendo Switch since February, and according to Progress Report, Clockwork Origins is currently preparing for release on the PS4. Gamers immerse themselves in cyberspace in Tri6: Infinite, dodging procedurally distributed obstacles and defeating evil viral enemies for as long as possible to reach the top of the global leaderboards. You can play locally in multiplayer with up to 4 people and make life difficult for others by using various powerups from missiles and mines to boosts and jumps. Head over to Tri6: Infinite on Steam here and you can support the project here.

In February, Spaceflower released two updates to the fast-paced Viewergames Arcade streamer game pack. As a streamer, you pull out one of the games from this game collection and the viewers can immediately play along on Twitch. Chaos is inevitable. Viewergames Arcade offers a Twitch extension for convenient control and interaction with viewers directly from the channel page, supports Channel Points and the use of Twitch Bits.

The update 3-2-1 GO at the beginning of February brought live items, timers and other improvements… definitely too many to list them all here. The balancing was also revised.

With the Get Wrecked update, especially those gamers who love to shoot down their friends in various other racing games with a plumber, among others, will have a lot of fun. As the name and the picture reveal, the racing cars of other gamers can be wrecked. What’s new is that the destroyed vehicles leave behind a flaming inferno. Also, bombs hitting oil pools will ignite from now on and leave DoTs on cars driving through them. There is also a new map and, among other things, new commands. Click here to go to Viewergames Arcade on Steam.

We have already reported on both campaigns and today we would like to invite you once again to support Path of Savage Gods by lyniat.games as well as the update Wildwood Tales for and by Crimson Company on Kickstarter. Both projects are aimed at specific target groups and are so beginner-friendly that even newcomers can get excited about them.

PoSG is a dungeon master tool for D&D. With it, Dungeon Masters procedurally manage and generate their own tabletop RPG adventures. This makes the dream of an open world for D&D a reality, because generating the world and the adventures takes much less time with PoSG. This leaves more time to experience the campaign with your fellow players.

Crimson Company is an intense 20-minute card game duel in which players raise an army of mercenaries. Players face deep strategic and tactical decisions, can use crazy combos and nerve-wracking mind games to their advantage. Wildwood Tales is the third update for the core game, which has an app and a PC version being developed as a Stretch Goal. There are still a few backers to contribute to this and we are keeping our fingers crossed that the goal will be reached. Apart from that, Crimson Company is very successful on Kickstarter and you can also admire a character from the game in the current key visual on the homepage.

Support both projects now and experience how two exciting games are created in Bavaria again!