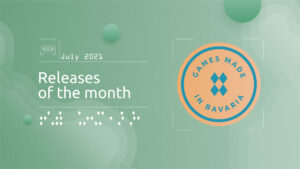 #GamesInBavaria Releases of the Month July 2021

We have discovered five releases and updates for you in July. Storm the sky with HandyGames, experience the summer update for Tibia from CipSoft, fight zombies together with Solar Powered Games, let the cards talk with Frikapps and face your enemies in the update for Realms of Arkania from UIG. Enjoy your releases of the month!

You have a release or an update for a game coming up? Just send us an email and we will feature you in the news for the corresponding month.

HandyGames from Giebelstadt, Germany, released the flight racing game Skydrift Infinity for PC (Steam) and consoles on July 29. Skydrift Infinity is an action-packed arcade game with a focus on a fast-paced and fun flying experience that you can play alone or with up to eight other pilots. In different game modes you’ll be able to participate in deathmatches and armed races, as well as other competitions, using maximum pimped-out modern airplanes. Loosely based on the motto: if you can’t outrun them, just shoot them down. You can watch the launch stream here on Twitch.

Accompanied by a new client artwork, CipSoft from Regensburg released the annual Summer Update for the MMORPG Tibia on July 12th. Read the news to learn about the new features and content: Explore the ancient Ruins of Nuur and discover more about the former inhabitants of the ruins buried under the sand. Support local authorities in their search for hidden criminals, find a missing wife, and help the gnomes deal with the threat from below. Take down the new World Boss, collect new outfits and items with special item modifiers, occupy additional Action Bars, and take on PvE challenges in the new Tibiadrome with precious rewards. Tibia is one of the oldest and most successful Fantays MMORPGs for more than 20 years and is completely Free to Play with optional Premium features. You can find even more updates from Tibia here on Facebook.

Together with publisher Assemble, Munich-based developer Solar Powered Games released the pixel-art survival retro game Highrisers on Steam on July 15. In it, you lead a team of four survivors through an urban wasteland of abandoned skyscrapers and high-rises, where the streets are crowded with the mutated victims of a mysterious disease. Humanity has been ravaged by a mysterious prion disease that traps the infected in an eternal dream. Unable to wake up again, they transform into the mysterious Dreamers: sleepwalking, zombie-like creatures that shun the light. Four survivors are trapped on top of a skyscraper. To survive, they must be resourceful and work together. When you purchase the Save the World Edition of Highrisers, publisher Assemble will donate 10% of the proceeds to the International Rescue Committee (IRC) for humanitarian aid in Yemen. Also, follow Solar Powered Games on Twitter – where you can currently find lots of pixel art animations and graphics straight from the game.

The company Frikapps from Passau is brand new on our radar. On July 3, the team released their first project in the Google Play Store with the app for the card game Fatum Cards. FATUM is a powerful yet simple tool that allows you to create full-fledged stories for your 5th Edition DnD characters or for other fantasy RPG characters. Although it was developed for fantasy/epic roleplaying systems, FATUM is also suitable for other artistic creations, whether you are a writer, scriptwriter or illustrator. Discover the FATUM universe and the lovingly illustrated cards for your next fantasy adventure. More from Frikapps can be found here on Twitter.

UIG Entertainment from Oberhacking released Star Trail, the update for Realms of Arkania (available on Steam here) in July. Star Trail / Sternenschweif is a remake of the classic second part of the Nordland trilogy from Das Schwarze Auge. This role-playing game features dozens of talents and spells, extremely diverse racial and character classes, and a challenging turn-based combat system in isometric view. The game is based on the DSA rules and is a mixture of V3 and V4. On Steam you can also get the Realms of Arkania Ultimate Bundle with all parts of the successful series and here you can find the teaser for the Star Trail update.