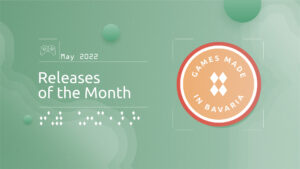 #GamesInBavaria Releases of the Month May 2022

And again a new month has begun! Last time we presented you the compact releases of March and April. This time we focus again only on one month. In May 2022 we were able to find seven releases for you. We go to the galaxy and sunken worlds for educational content, protect our world from demonic creatures, and then relax on our farms. We hope you enjoy your releases of the month!

Back in April, Clockwork Origins announced that Elemental War 2 would be released on May 6. The successor to Elemental War comes almost four years later and has both new and familiar features in store for you: In the tower defense game, hordes of monsters storm out of the abysses of hell. The forces of evil were able to enter the game’s world through an incorrectly conjured portal. Your task is to develop a strong defense line of towers, which will prove effective against the monsters. Additionally, an innovative game mechanic awaits you: When you defeat a particularly strong enemy called an elemental, you’ll get an elemental stone, which you can use to build new defense towers. By constantly collecting them, you can always expect new tower combinations to keep the gameplay exciting and flexible. The game also has something to offer for the eye: The maps are all lovingly hand-drawn. The launch trailer shows the game world with its principles. The developers can already hardly realize the success of the game, as there were almost as many sales in the first month as there were for the previous game in three years. They are also open and grateful for constructive feedback to fix bugs and generally optimize the game experience for you. That’s why we advise you to buy the game in the Steam-, Playstation-, Xbox-, Humble- or Stadia-store and leave feedback for the developers.

EDURINO have got a new addition to their animal family in the form of Robin the raccoon! After children could already learn the first reading and writing with the fox Mika and also with the bird Niki first English vocabulary could be taught, Robin is dedicated to mathematics. In Zahlen & Mengen ab 4 (Numbers & Quantities from 4), the educational game “Die versunkene Welt der Zahlen” (“The Sunken World of Numbers”) is included. Children aged 4 and up embark on an exciting adventure together with the game character Robin: The world of numbers must be rebuilt! Mathematical preschool exercises are playfully embedded in exciting missions. Children learn here the numbers from 1-20, as well as first quantities and geometric shapes. Counting and logical understanding can also be learned in the game, which, like its predecessors, was developed with the help of educational specialists and experts. You can order the starter set, which consists of the input pen, Robin the raccoon and the learning world “Zahlen & Mengen ab 4”. If you already have a starter set from EDURINO, you can also order just the figure and access to the learning world. You can also get first insights through the lovely Instagram posts.

upjers is also once again showing its soft spot for dwarves: its game Wurzelimperium (Root Empire) has been providing players with fun and entertainment for 14 years now. In May 2022, an international, mobile version of the game was therefore developed with Wurzelimperium 2. Familiar features of the predecessor can be found again. Clear your garden of weeds and roots to make way for your seedlings. You can now use the touch screen to grow and harvest your plants. In the new app, you’ll find new singing gnomes that can give monster crops another boost. Also exclusive is the House of Biomes, where gardens are created around specific themes. The look and feel of the game also differ from the browser game. More information can be found on the developers’ blog. The game was supported by concept funding from the German Federal Ministry of Transport and Digital Infrastructure and can be downloaded from the Play Store here.

HandyGames: This Is the President & Townsmen – A Kingdom Rebuilt

HandyGames were able to celebrate even two releases this month! On the one hand, they now present a mobile version of the game This Is the President. The political thriller was already released for the PC at the end of 2021. After the great success, a version for mobile devices was not waiting for long: Almost half a year later, HandyGames now makes the game available in the App-, Play- and Galaxy-Store. In the adventure game, you have been elected President of the United States in the year 2020 and at the same time must escape your former crimes as a multi-million dollar CEO. In doing so, you’ll have to ratify Amendment number 28, which gives every president a life insurance policy.

Furthermore, the publisher announced that Townsmen – A Kingdom Rebuilt can also be found on Netflix as of this month. The game has already existed since 2019, but the franchise around the Townsmen saga has continued since the first Java release in 2003.

Gentle Troll Entertainment takes you on a galactic journey this month: In cooperation with the Joachim Herz Foundation and other contributors, the digital escape game Space Transporters was developed. The aim of the game is to teach players basic economic assumptions. Within the game, the players are onboard a spaceship and have to bring a particularly valuable payload safely back to earth. As part of the spaceship crew, they have to solve various tricky puzzles under time pressure allowing them to gain experience as a resource. In the course of the game, this experience can be linked to basic economic assumptions such as scarcity, the economic principle or opportunity costs. In particular, the game is aimed at pupils, as the elements learned can also be discussed and deepened with a teacher after the game. More information about the development and idea of the game can be gathered in this interview. The game was released for free and can be downloaded here.

Finally, we would like to introduce Harvest Days: My Dream Farm, which was published by Toplitz Productions. Together with Family Devs and Sundust, the game was released in Early Access on Steam and GOG. Your new, small farm offers you the opportunity to escape the classic 40-hour work week: You live your virtual life on a peaceful little land, surrounded by friendly animals and helpful neighbors. You take care of your farm animals and can plant your fields according to your individual preferences. You can also go to the lake to relax and fish in the idyllic atmosphere. The open-world game also offers you possibilities to freely explore your surroundings. You can sell your harvest within the village to further expand your farm. You can see how the game will continue to change in the coming months by looking at this roadmap. We are very excited!