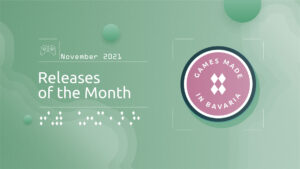 #GamesInBavaria Releases of the month November 2021

In the run-up to Christmas, we have eight great releases and updates from Bavarian developers and publishers for you. Included are a speedrun platformer debut, a demonic visual novel, a wild bunch of dogs, something new for the cops among you, a survival game in the desert, an educational game about infections, a simulator with a crowd of millions and a dinosaur adventure. Enjoy your releases of the month!

As the first release of the month of November, we present you today a debut game from Studio Moondowner from Brunnthal. Afterthought (released on Steam) is a 2D speedrun platformer with full controller support. Learn to speedrun through levels with ease as you experiment with different play styles. Explore the movement system with nearly infinite possibilities that is easy to learn but extremely difficult to master. As the character Black, you can immerse yourself in surreal and wonderful worlds across 56 playable levels with 8 boss battles. Also included are online leaderboards for all types of play styles, a speedrun mode with a master timer, a serene yet wild and uncompromising original soundtrack, unlockable achievements, skins and special effects, and the option to design levels with an intuitive level creator. Dive into the 2D speedrun platformer Afterthought now.

The publisher Giiku Games from Rosenheim welcomes you to Hope Hill Village with Novena Diabolos in November. A human who has lost his memory. Four demonesses who are out for blood. A reporter trying to survive nine days in a remote village: This occult survival mystery adventure will keep you on your toes from start to finish as you try to solve one crime after another. You’ll fight against time to save the only human girl trapped among demonesses and gain her trust to finally escape this wretched place called Hope Hill Village. Every playthrough is different in this thrilling visual novel, which you can purchase here on Steam.

For the game Police Simulator: Patrol Officers, which was released in June 2021, Aesir Interactive presents The Operation Anti-Drug Update in November, you can find the trailer here. In it you will meet illegal graffiti sprayers, drug dealers, a new district and experience numerous other improvements to the game. In addition to the third district in Brighton, there is a new vehicle and new law violations, against which you can fight on patrol. The developers are looking forward to your feedback in the current official Community Poll.

At the beginning of November, publisher Toplitz Productions from Oberhaching near Munich released the survival game Starsand for PC on Steam and elsewhere as Early Access. Starsand is an action-oriented survival adventure inspired by movies like John Carter and Stargate that takes players into a harsh and unforgiving desert world where they must search for food, hunt and build in order to survive. To survive, they must endure the scorching sun and freezing nights. To return to Earth, players will have to master strange and ancient alien technologies, fight fearsome monsters, and defend their camp against enemies and the elements. A preview of the roadmap of upcoming features can be found here and the release trailer, first guides and release day stream can be found here.

Munich game developer Thera Bytes is currently working on Zombie Cure Lab, but in November released INFLAMMANIA 2, an educational game for the browser, Android and iOS devices, developed in collaboration with the Medical Clinic 3 – Rheumatology and Immunology at FAU’s Erlangen University Hospital. Viruses, bacteria and parasites invade the human body and trigger a violent inflammatory response. With the help of the strategic use of immune cells and their diverse combat techniques, the pathogens can be eliminated. The mission is to fight the pathogens in a targeted and tactically smart way while keeping the inflammatory reaction under control. The serious game explains different molecular functions of the immune system and its cellular players. Developed in cooperation with the DFG-funded Collaborative Research Center (SFB) 1181 “Switching Points for the Resolution of Inflammation” at the University Hospital Erlangen, the mobile game conveys scientific knowledge in a playful way and encourages the discussion of diseases and the workings of the immune system.

At the end of November, GIANTS Software, headquartered in Switzerland and with a branch office in Erlangen, Bavaria (click here for the careers page), released Farming Simulator 22, also known by its German name Landwirtschaftssimulator 22, for PC and consoles. The players slip into the role of a modern farmer and creatively build up their farm in three different American and European environments. Farming Simulator 22 offers a huge variety of farming operations focusing on agriculture, livestock and forestry with the exciting addition of seasonal cycles. More than 400 machines and tools from over 100 real farming brands are included. New machine categories and crops add new game mechanics to the game experience. Gamers can farm cooperatively in multiplayer mode and expand the game through a variety of free community-created modifications. Watch the launch trailer for the game, which sold 1.5 million copies in its first week.

In April, upjers released the app Dinosaur Park: Primeval Zoo, which was funded by the BMVI with 200,000 euros. Now the Bamberg-based company has also released the dinosaur park for PC and laptop. A sensational find is keeping science busy: An Antarctic expedition has found dinos in the ice! When thawing, the prehistoric monsters even came to life. Now a dino park with suitable enclosures has to be built quickly. The researcher Dr. Walter Müller will help you, because he had always suspected that frozen dinos could be brought back to life. Will he also find out the secret of his missing wife? Start your prehistoric adventure now with Dinosaur Park: Primeval Zoo.